There was arguably no German postwar poet who dared to experiment with media more than Rolf Dieter Brinkmann. To engage in stylistics in the traditional sense with this author is a challenging, perhaps even impossible undertaking, considering his work, which was a constant outbreak of literary conventions. For him, everything was poetry – not only lyrics, novels, poems but also collages, arrangements, photographs, films, sound, and voice recordings. Yet, I would like to claim that ‚a‘ Brinkmann is almost always recognizable as ‚a‘ Brinkmann. Something genuine to him resonates in all of his works.

After the Second World war, a technical-poetic versatility was achieved, which, on the one hand, made previously unimaginable forms possible, and on the other hand, a rather circumscribed than formulated classical personal style emerged. That raises the question of whether stylistics in the sense of an »ideal Goethe« can still be a matter. 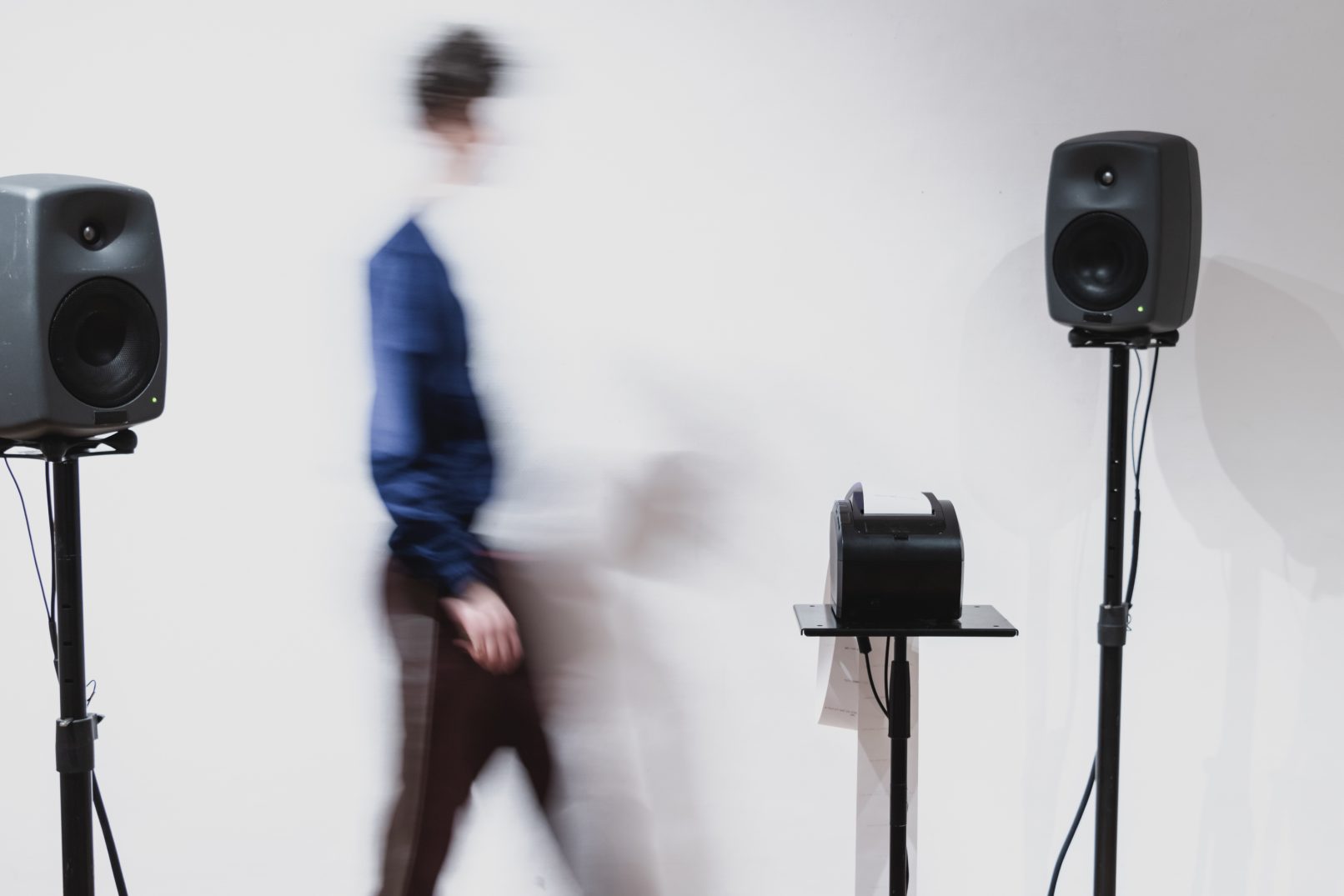 In his preface of »silverscreen« an anthology of new American poetry, Brinkmann argues: The surprising thing about the new American poems is that in the first place, they are simply there. […] I mean, they contain presence. […] A presence relating to the one who writes and not to the fulfillment of general demands, which are always demands of the already existing. What is strived for is an expression for the individual sensitivity, the deviation from the given pattern, namely »poem«, and from the norm that makes »poetry« in such a conceivably simple manner manageable until now.

Brinkmann is convinced that with the »American poem« the authors‘ personality becomes increasingly significant due to the dissolution of the poem as a work of art (opus) with sophisticated pictorial and imaginative material to an en passant and subjective form of expression such as Brinkmann cultivated to the point of excess.

However, I remain under the impression that »excess« is also an artistic technique in dealing with conventional materials. That leads to the conclusion that style in Brinkmann’s sense always arises anew and situationally from these necessities only to disappear again.

According to Oscar Wilde, the poem is dead: »Gutenberg killed poetry« which itself wants to be a poetic statement!
To announce the end of art is an artistic act.
Art exists »in« paradox.

Advertising texts have developed into an autonomous type of text over the last 100 years. There are numerous studies on how contemporary literature and advertising seem to influence each other. Literary figures of different styles and origins have been active in the field of advertising:

Writers have and will always produce advertising texts in great numbers. They existed even before the world has transformed into a consumer society. Vladimir Mayakovsky, a soviet role model poet, wrote advertisements for delousing products. In the late 19th century, Frank Wedekind from Schwabing was in the service of JULIUS MAGGI: 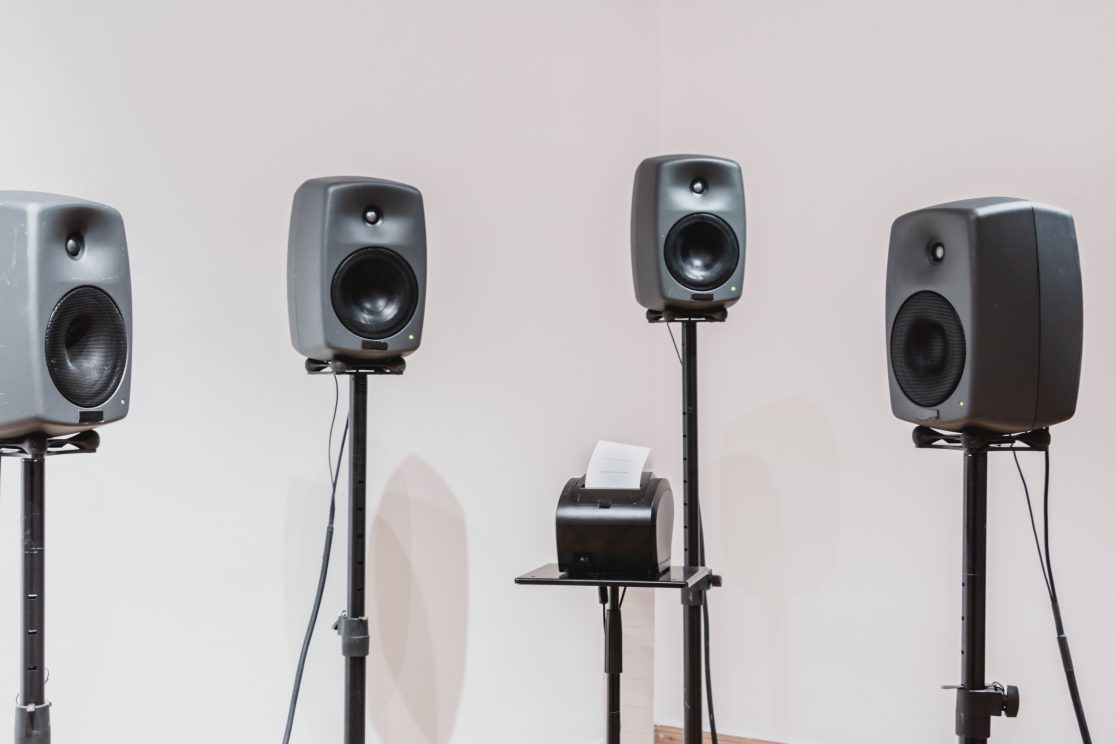 Following Thomas Wegmann, advertisement and contemporary literature are already MEDIAL and SOCIAL products of the same label (= postmodern) simply because of their simultaneous appearance. Directness, immediacy, intensity, and simplicity – terms that played an essential role for Brinkmann in his search for other »ways of writing« – are often reflected as structural features of today’s advertising texts.

While Brinkmann criticized consumer society and its advertising slogans, his collage techniques and colloquialisms were personal stylistic devices that can be re-discovered in today’s advertising slogans. Brinkmann conceived art as an extension of life in a very elementary sense. Therefore, he repeatedly transgressed the boundaries of art and non-art (at that time). The two modes of writing pursue different motivations, but at the same time, are sharing joint rules of construction.

Due to these similarities, this project intends to make postmodern advertisement readable through Brinkmann’s rulebook, and to fictitiously perpetuate Rolf Dieter Brinkmann in 2020 and beyond that.

It is human nature that the most despised things are the most indispensable. Wedekind wrote in 1886 about a new product wanting to revolutionise not exclusively Swiss‘ cooking habits: STOCK CUBES.

In exchange with the programmer Georg Kettele (AT) and media artist and composer Gerriet K. Sharma (DE) I developed an AUTOPOETRY APPARATUS, whereby the advertising texts generated by a trained neural network in the writing or speaking style of Rolf Dieter Brinkmann are transmitted live and spatialized via four loudspeakers.

Individual texts are selected by a fifth, higher-level AI (referee) are transmitted and written down in situ by a commercial thermal printer. For the work, not only the medial aspect, which plays an essential role in Brinkmann’s work, is crucial, but also the aspect of TRANSMISSION: Transmission opens up spaces of experience. In it, something »third« can emerge.

In Brinkmann’s work, the »third« becomes among others »readable« in the transfer of his writing style to techniques of tape recording and playback, their possibilities and limitations, and the collaging of experiences as audible expression. 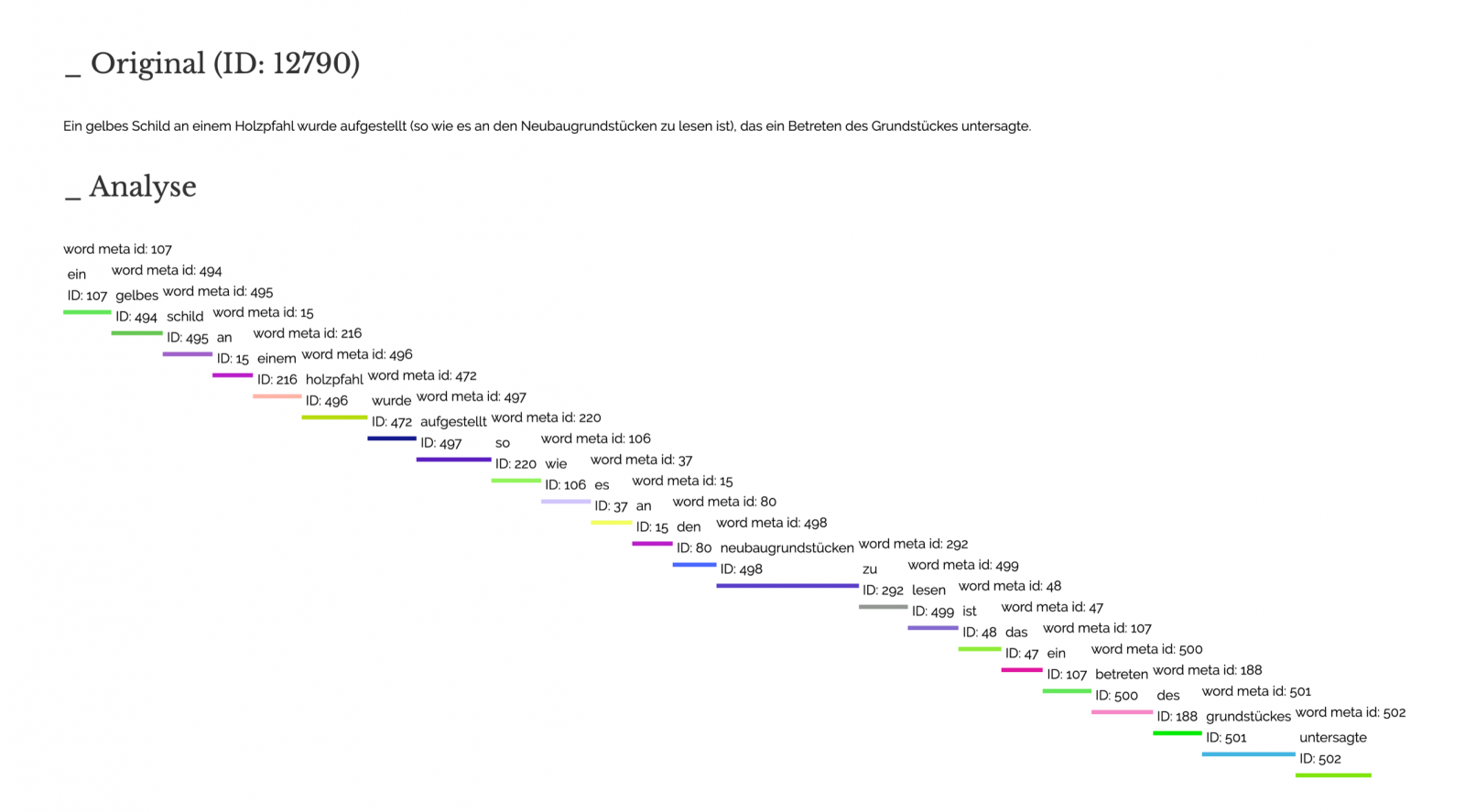 In further exploration of Brinkmann’s conception of the poem, I applied the following derivation to my project proposal:

Text state here wants to emphasize above all the time component.
For Brinkmann, the »moment« or even the »now« was very important in contrast to states defined by units of time – mechanical/discrete. Also, in the context of algorithms, one speaks of »state spaces« and of »values of internal state variables« where vectors represent the individual ACTIVATING STATES.

Within the AUTOPOETRY APPARATUS, the learned and practiced writing style is transferred to a different pool of text type.

My working hypothesis is that due to not utterly controllable work of the AI, deviations and set pieces (formerly: errors) occur. These »errors« are not classified as failure of the transfer process, but understood and used as potential. Precisely these errors, in turn, can open up impulses for situational and spontaneous reflection on »right« and »wrong«, convention and the other, and can more sharply encircle our ideas and expectations as an effect of the respective work (cf. Brinkmann: abolishing the boundaries between »high« poetry and »mere« writing).

Thus, the work is neither about a standardised problem or problem-solving nor about generating a new-old Brinkmann but about analyzing Brinkmann techniques that subsequently generate something »third« by applying artificial intelligence.

Many musicians have been similarly learning songwriting since the Beat Generation: one deals with self-chosen models – initially in the sense of imitating, copying – and then from the extracts of various practiced techniques, something different develops in relation to a personal problem statement / definition?

The audience enters a space that shows four loudspeakers on stands and a commercial thermal-printer for receipts built into a console.

The loudspeakers, directed towards a common centre for dialogue, act like discussants – four AIs are talking to each other, articulating different versions of the text-generation: sometimes a sequence of advertising slogans sounds well composed, sometimes they emerge in a jumbled manner and only parts »make sense«, and sometimes all AIs speak simultaneously leaving the listener with questions. Sometimes they speak loudly, sometimes softly, and always in different emotional »states«.

Due to the different rhythms of speech and the emotional moment of the sounding speech, the apparatuses appear human-like, while digital material is transferred back into an immediate analogue experience. Thinking, formulating, competing as well as inner states are generated exclusively through sound and thus made audible for the audience. 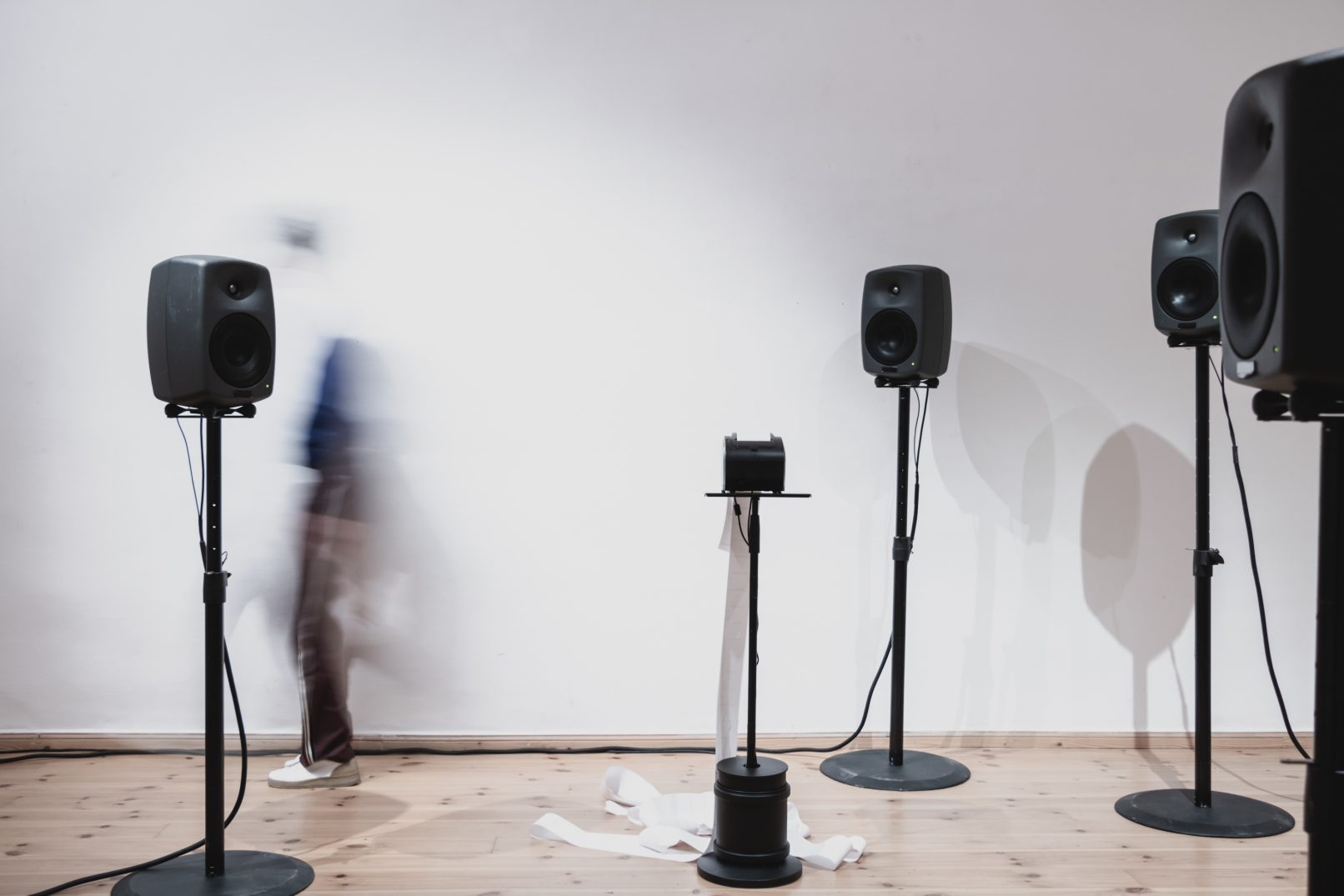 THERMAL PRINTER FOR TILL RECEIPTS

The writing of the selected AI slogans results in a further transfer, namely a RE-TRANSFER from digital to analogue on the thermal paper roll. These »till receipts«, as they have recently become necessary for any business according to statutory regulations which came into force on January 1, 2020, are typographic proofs of »successful« advertising of a functional and functioning consumption.

However, the Brinkmann-poems are apparatively written here on an unstable carrier medium: printing on thermal paper is not durable. After a while, the selected AI-Brinkmann-advertising-poems fade to the point of being completely unrecognizable. The document function dissolves, the laboriously created and archived has to disappear again due to the medium.
The ‚New‘ and in the moment generated evolves, is discussed in order to disappear again. 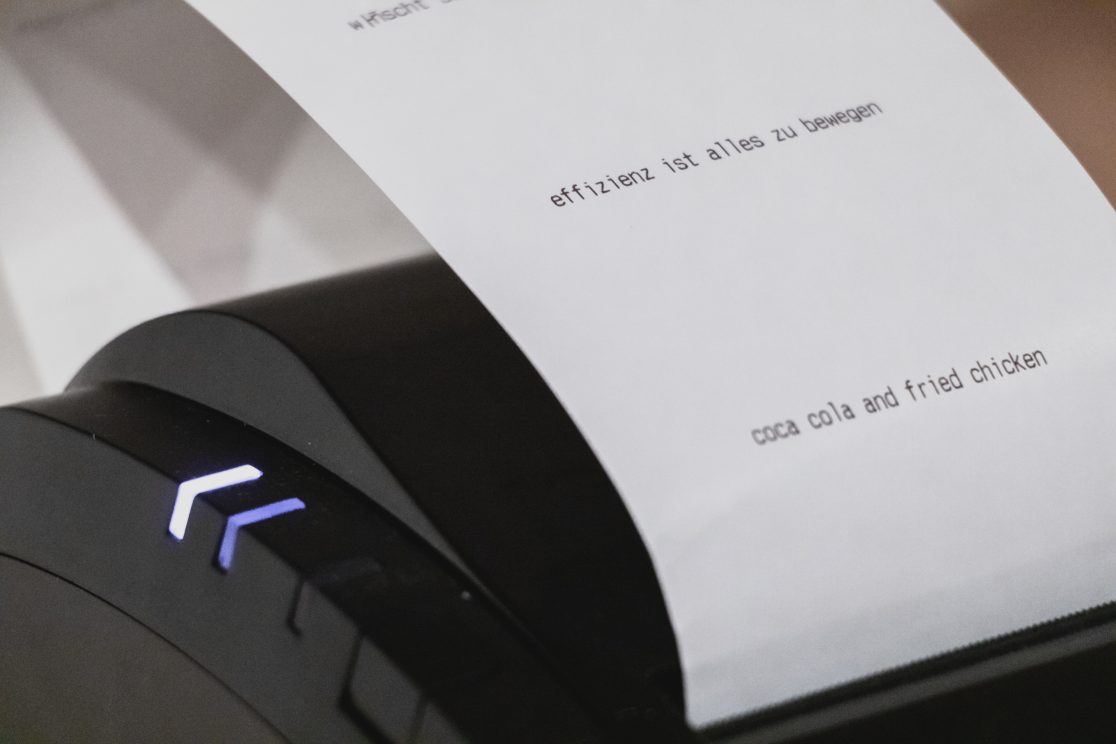